Jobs In Spanish Language In India 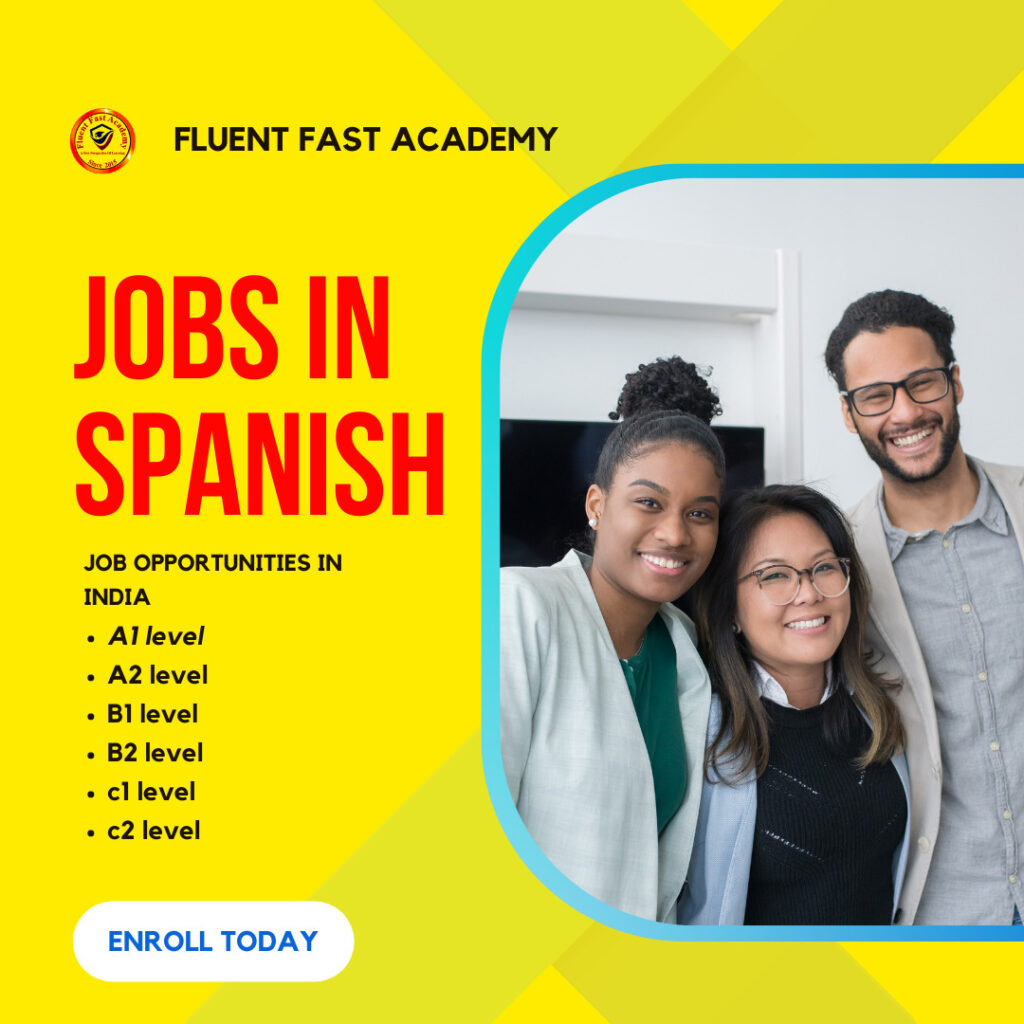 Learning Spanish is a great way to boost your career

Why? Because you can use your knowledge of Spanish in many different industries, which means you can open up endless possibilities for yourself.

The world is becoming more and more connected, so the demand for Spanish specialists in India is growing. You could use your ability to read, write, listen and speak Spanish to open up a whole new world of possibilities in various industries across the globe.

But why learn Spanish?

Immigration, study abroad, and travel is all intrinsic motivations for learning a new language, but let’s consider these options:

– Immigration: You could potentially get sponsored by an employer who needs employees with language skills to help them meet their business goals (and earn some extra money).

You could also get hired as an interpreter or translator at an embassy or consulate if you have fluency in the Spanish language. That way you could gain valuable experience while getting paid work!

Career & Jobs in Spanish In India

If you’re looking for ways to improve your career prospects and earn more money, then learning Spanish could be the answer.

Some examples of careers where you can use your skills are teaching, tourism, translation, interpretation, international business, journalism, foreign service, and many more.

If you’re looking for a job, Spanish would be a great way to go.

If you have a knack for languages, then you can always look forward to a career in translation and interpreting. The demand for these services is on the rise across the globe as more people are becoming bilingual. In India, there are plenty of Spanish speakers who would love to work with you.

With this job, you can get paid in cash and also earn good benefits like free accommodation, medical aid, and other perks.

If you’re looking for a career in translation, interpretation, or teaching, Spanish is going to be incredibly useful. There are plenty of reasons to learn Spanish, and one such reason is a rise in job openings in Spanish!

Spanish is a language that has been used for centuries. With the rise of globalization, Spanish is a valuable asset that will definitely boost your career prospects.

If you are planning to open up a business in India, you may want to consider these positions:

The benefits of learning Spanish are numerous and far-reaching. It will help you get ahead in your career, understand different cultures, and connect with people from around the world.

These are some areas where Spanish will be an asset that would bring in big cash and will surely boost your career outlook.

There are many jobs available in translation and interpretation in Spanish. These jobs include translator, interpreter, editor, proofreader, and content writer.

If you want to get into the translation and interpreting business, it’s not enough to just be able to speak Spanish. You need to have a thorough understanding of both languages—not just a superficial knowledge of the grammar, but an in-depth comprehension of the culture and customs that make up your target language.

If you’re going to be a translator or interpreter, you have to have what I call “near-native proficiency” in your target language. That means that you need to know the words and phrases that are native to your audience, whether they’re from Spain or from Brazil.

Another thing that makes someone perfect for this job is an experience in translating and interpreting. When you’ve worked as a translator or interpreter before, you’ll be able to know how things work with machine translation and human translation—and then apply those skills when you’re working on new projects.

You can also get into this field if you have a degree in Spanish or b2 level certification in Spanish. It doesn’t matter how much experience you have—what matters is that you can translate well!

If you want to be a translator or interpreter in India, then you need near-native proficiency in the Spanish language. You can achieve this by having at least mastery or higher competency level like a B2 level in Spanish or C1 level in Spanish of SIELE or DELE (or Master’s degree) in the Spanish language. By joining Fluent Fast Academy easily you can reach this level in a short period of time.

Spanish Jobs in BPO, KPO, IT, and In MNCs

Spanish is one of the most popular languages in India and with good reason. The demand for Spanish speakers has grown tremendously in recent years, particularly among BPO, KPO, and ITES companies.

Many Indians have chosen to learn Spanish as an additional language because of the excellent job opportunities it provides. In fact, there are plenty of processes in a BPO, KPO, and ITES that involve different roles and pay-scale. Most of these BPO/KPOs come from the U.S., where Spanish is the second most valuable language after English, and is used to help companies in that country communicate with clients who don’t speak English as fluently.

If you learn Spanish, it will be easier to get a job as a linguist or translator at an international company.

A Diploma or Advanced Diploma in Spanish from Fluent Fast Academy is enough for most jobs in MNCs. You can find such openings in metropolitan cities throughout India—the average salary requiring language being between 4-6 lakhs per annum.

Spanish is the world’s most spoken language.

In India, there are many opportunities for Spanish speakers to teach the language.

If you have a flair for teaching and know Spanish, you can select from different career pathways. India is a great option for language teachers.

Today, there are more teaching positions in Spanish across India than ever before.

The popularity of Spanish has been growing steadily in schools, colleges, and universities.

Many corporations and professional institutes also search for Spanish trainers to teach their employees.

Besides, private tutors and online classes are also becoming popular. Thanks to the growing number of people learning Spanish, those with excellent command of the language can often find work as instructors.

There are many job opportunities in this field all over India.

Plus, you can also opt for a freelance linguist job where you can work on your own schedule as an independent contractor or freelancer helping clients who need translation services or interpreting services. The salary depends on your experience, profile, academic qualifications, and others.

If you are looking for Spanish jobs in Spain, then the first thing to do is to check out what embassies and consulates are hiring.

Embassies are diplomatic missions that represent a country in another country. They provide their citizens with consular services like issuing passports, providing visas, and helping with emergency situations.

Every foreign embassy employs people from the host country to handle a variety of tasks.

Spanish jobs in the embassy offer high salaries and many perks, but there are other reasons to work at an embassy.

But another important reason for working at an embassy is the prestige and reputation that comes from such a job.

With over 20 Spanish-speaking countries—among them, the second most popular native language worldwide. There are more than 70 nations where Spanish is spoken by measurable populations.

After learning Spanish, you can find work at more than 20 embassies in India.

In most embassies, the primary type of job is administrative. In addition to language skills, you also need qualifications and other relevant experience to be considered for these positions.

People with an MBA in international relations, IT professionals, and HR can benefit from this course.

Spanish is one of the world’s most widely spoken languages, ranking second only to Mandarin Chinese.

The hospitality, leisure, entertainment, and travel industries are among the world’s largest.

Spain attracts many Spanish-speaking tourists every year, and Spanish skills will increase job openings in the tourism, travel, and hospitality sectors.

For job seekers, the ability to speak Spanish can help them stand out from other candidates.

Because of these employment opportunities, Spanish has now been considered a viable career rather than just a hobby or extracurricular activity.

You can find a wide variety of jobs after mastering Spanish.

By joining Fluent Fast Academy you can make your future bright in the Spanish language.

If you’re still unsure whether to learn Spanish or not, consider the following facts: evidence suggests it’s a sound investment. Leave a comment below and share your thoughts.